Racing to the Bottom: Online Freelancing

I’m ten weeks into my freelance career, and it hasn’t exactly gone according to plan. I’ve been working, yes, and getting paid, which is great. I have designed and had printed my new portfolio and some swanky business cards. I’ve had great meetings with potential clients – so far, all good.

But what I hadn’t foreseen was that I would develop an annoying health issue – I have almost completely lost my voice. I’m not ill – I feel absolutely fine, but when I open my mouth to speak it’s a lottery what comes out, if anything at all.

I’ve rescheduled meetings, avoided Skype calls (no miming skills on my CV) and the phone. And that has made finding new freelance work very difficult. My baffled GP has arranged a visit to see a specialist, but what to do until then?

Hit the freelance websites, that’s what. Online freelancing seemed to be the perfect opportunity to keep working until my voice returns.

There are many sites dedicated to matching freelancers to clients. After some research I jumped in at the deep end and signed up with the largest – Upwork. Based in the US, Upwork is the result of the merger of three smaller freelance sites, Elance, oDesk and Upwork itself. Once registered and with portfolio pieces uploaded, I scanned the available jobs.

I had read a lot of reviews about Upwork, and freelancer sites in general. The vast majority, written from the freelancer’s point of view, were negative. The most accurate analysis, although a little out of date, is this one by Jay Soriano. To sum up the pros and cons: 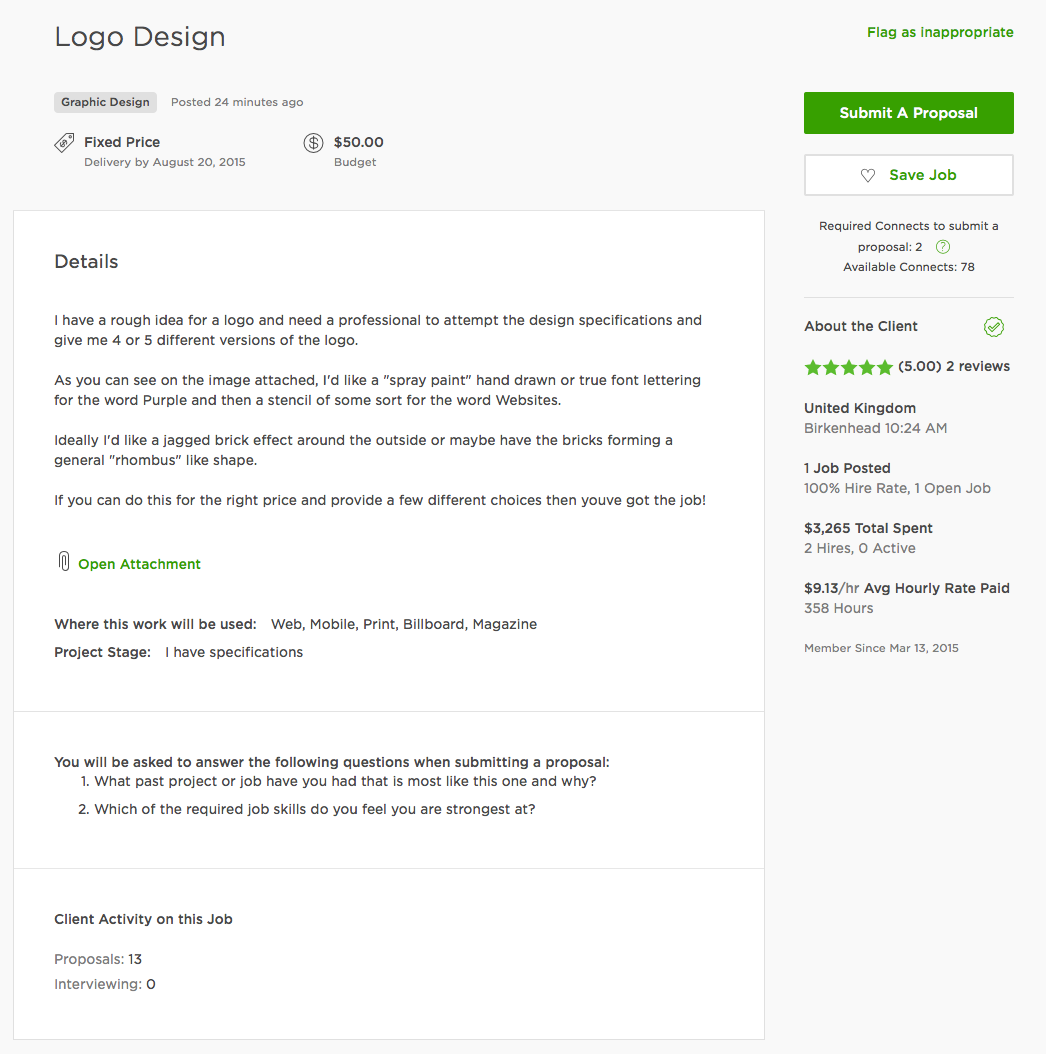 Glossing over the laughable $50 for a logo for a moment, as you can see, this client has used Upwork before. For 358 hours, in fact, paying an average of $9.15 per hour (or £5.83 in UK terms). This means the British client is paying below the UK minimum wage (currently £6.50 for over 21s). The £5.83 they are paying per hour is not what the freelancer receives either. Upwork will be deducting their 10% fee, and depending on how you choose to be paid you could also be charged currency conversion fees and other handling charges. That £5.83 per hour would be worth, at best, £5.25 to the freelancer.

I looked through the 13 proposals made for this project. The highest hourly rate charged by the tendering freelancers was $25, the lowest $4.44, which equates to £2.83 (then take off 10%). If that is indicative of global market rates, the race to the bottom has been won.

On most of the reviews of Upwork and the like you see comments from freelancers saying that they have found great clients and made money, but they had to put in a great deal of effort to do so. On the review site FreelancingGuide.net, which delves deeply into life as an online freelancer and compares a large range of freelance websites, the author pulls no punches, with advice sections entitled “Maintaining a Positive Attitude and Avoiding Bitterness” and “Feast or Famine – But More Often Famine”. One piece of advice I read somewhere (I can’t find it now) stated that you should expect to bid on over 100 jobs before winning your first one. Considering the time that goes into preparing proposals, that is a lot of time expenditure without any guarantee of a pay cheque.

In the case of Upwork, I bid on about about 15 projects, and won none. I will admit that, even having read the reviews, I was dismayed by the lack of quality, the rates quoted and the service fees charged. I gave up with Upwork and decided to try somewhere a little closer to home: PeoplePerHour.

PeoplePerHour is a smaller freelance site, and it’s based in the UK. In user experience terms, it is considerably easier to use than Upwork, and it is also more innovative. PeoplePerHour lets you to post classified-style ads, called Hourlies, as well as allowing you to pitch for projects. You can also pay a premium to have your proposals featured (ie pushed higher in the queue). Being British-based, a lot of the projects and freelancers are from the UK, so the hourly rates quoted are often higher than on Upwork.

You are encouraged to post an Hourlie, so I did. Not knowing where to pitch in terms of price, I scanned other Hourlies and found one which was a similar match to the service I had in mind – logo design. There were still plenty of people offering a logo with unlimited revisions for £10, but there were also offers for £150, £200, even up to £500+. A key factor in my decision was that next to each Hourlie it showed the number that had been purchased, and at my target price of £250 there were a number sold. Having decided the price point was feasible, I produced my first Hourlie: 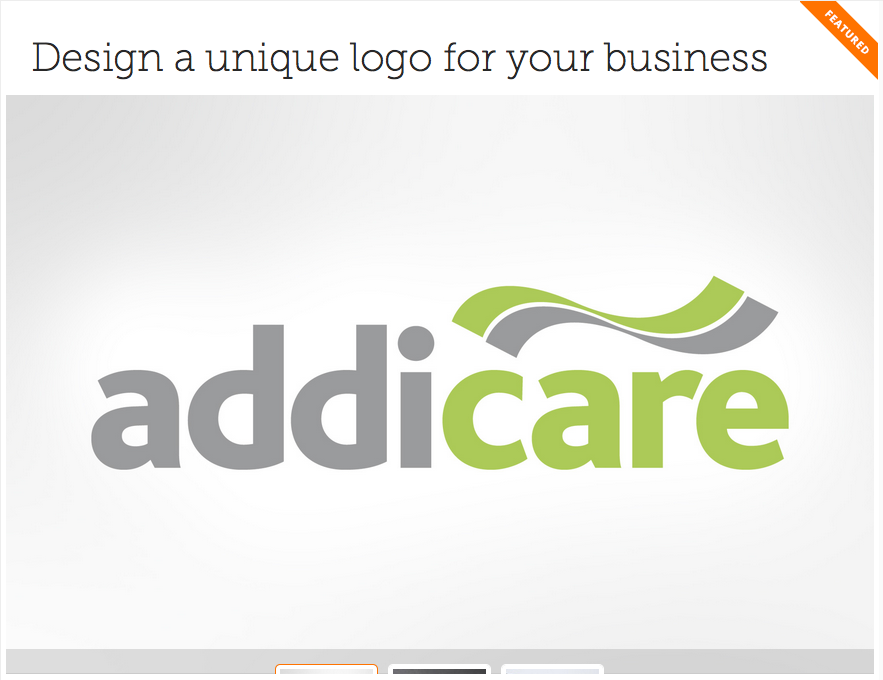 I designed the logo that featured in the Hourlie (above) a few years ago while working at an ad agency. Designed for a one-person, new business start-up (like a lot of the clients on PeoplePerHour) I originally produced about 8-10 options as a first proof, developed three, then finally settled on one and developed it further. I’d estimate the whole process took about 20-30 hours, and was charged to the client at agency rates (at a guess £65-ish per hour back then). A minimum cost to the client of £1300. My Hourlie, based on this level of service, was 80% cheaper.

To give myself a fighting chance I paid extra to feature the ad on the first page, and also paid to advertise it on Facebook, as well as publicising on Twitter and Linkedin.

The results: no enquiries.

I’m well aware that this probably reads like a case study in how not to do it.

In terms of applying for projects, I fared little better. I pitched for a variety of jobs (so far about a dozen) and had a brief chat to two of the clients, but in the end didn’t get either job. On one project I spoke to the client afterwards to enquire where my pitch was price-wise, compared to the winner, and they told me mine was marginally higher, but not by much. A lot of the hiring on PeoplePerHour is skewed by freelancer ratings – if you have not completed a project you sit at the bottom of the rating list. When you have a rating system based on projects completed, rather than skill or quality, the temptation is to lower your rates to get that first project under your belt. Do I want to do that? No, not really. But I might have to if I decide to persevere with PeoplePerHour.

Another couple of issues: PeoplePerHour inundates you with emails. One day last week they sent me 18 messages. A favourite of theirs is titled “You have been selected to bid first for the Job “blah blah blah”. On the face of it this is a good idea. However, when you open the email, the client wants a logo designing for his new business with a budget of £25. At first I found this rather amusing, but after a couple of weeks I’m finding it a bit offensive. Like this one from this morning: 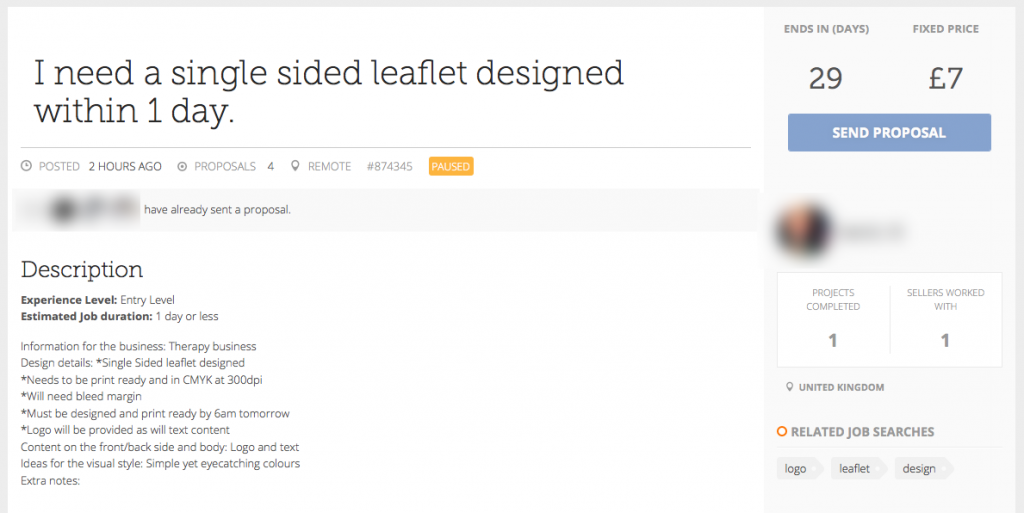 The other issue is not solely found on PeoplePerHour. As I said, I bid on a dozen projects, all of them “urgent”, according to the clients. Of those twelve, I have been turned down for four. The rest are still pending some 2-3 weeks later. The site is still accepting proposals but the jobs have, very probably, been undertaken away from the freelancer site. This leads to the site losing out on its fees and the freelancer losing out on any payment protection. In the meantime, freelancers are wasting their time writing proposals for jobs that have probably already been completed.

The sites I’ve talked about are not really about matching clients’ needs to freelancers’ professional experience, even though that’s how they are pitched. What they are actually doing is commoditising design services while taking a cut, which is driving down prices.

The sites offer attractive portals for their clients, with design services and freelancers collated into categories. This allow the client to undertake basic sorting of freelancers, including by cost. Clients are presented with an overwhelming number of freelancers, all of whom seem equally capable of fulfilling their requirements, so in the absence of any other type of comparison, most clients choose the lowest priced option.

In the retail world, once a product becomes commoditised, the lower price usually increases the amount of products sold. However this is not true for services – the amount of design work does not increase when fees are reduced. Hence the race to the bottom – design services go to the lowest bidder, regardless of quality.

If you can’t compete on price (and few western designers can when their hourly rate is in excess of a week’s pay for some workers in the developing world) you must compete on quality and differentiation. Two new freelance sites aim to enable this, concentrating not on price, but on expertise and personal recommendations.

The first is Adsortium. Currently only available to freelancers in the US, it “…places the focus where it should be – on how the person’s body of work matches a given project’s needs. The purpose of the system is not to generate a high quantity of connections. Rather, its purpose is to provide higher quality connections.” It also takes no middle-man fee – a sort of Yellow Pages for designers.

Another new breed of freelancer site is Coworks. To quote Jill Gutierrez, Coworks Community Manager: “At Coworks, we focus on personal connections and recommendations. The most comfortable and successful path to finding freelance resources has always been asking friends and colleagues. Coworks takes this important concept and combines it with an online platform that makes working together easier for everyone.” Whilst raising the bar in terms of quality, the Coworks system means they determine which freelancer is put forward for individual projects, which is not ideal from the freelancer’s point of view.

Until I get my powers of speech back I shall continue plugging away at PeoplePerHour – the great clients are out there, we’re assured. And it beats mouthing silently at prospective new clients like a goldfish. I wonder if there is a gap in the market for a mime artist charging $3 per hour…